Today has been a bit of an odd week as fans thought that yesterday would bring both a new update patch and new challenges. But challenges have been moved to Thursday (and will be on Thursday from now on), and the v4.3 update hits today instead.

Today marks the beginning of a new era of Fortnite: Battle Royale. Vehicles! Well, kind of. Chief among the updates is the new addition of a shopping cart, but that’s far from the only thing being added. Here’s everything in today’s big patch.

Shopping carts are a two-man “vehicle” of sorts where you can push around a fellow player. It will allow the pushed player to shoot from the passenger seat, though whether the cart affords them any sort of protection or not remains to be seen. This doesn’t seem like a terribly tactical addition to the game on its surface, more of something added to make for hilarious YouTube montages (“SHOPPING CART VICTORY ROYALE OMG!!!”), as opposed to anything that’s going to be next-level strategic. I thought shopping carts might be a way to get down from steep hills in a hurry without dropping and building under you, but the patch notes make it clear that you will still suffer from fall damage in a cart. But I can’t wait to see what people do with these.

Like apples before them, Mushrooms are a new addition to the game that will now restore a small bit of shield, 5 to be exact, and they’ll be found in shady wooded or swampy areas, your Moisty Mires and your Wailing Woods, for instance. Not game changing, but a bit of a pick-me-up all the same. 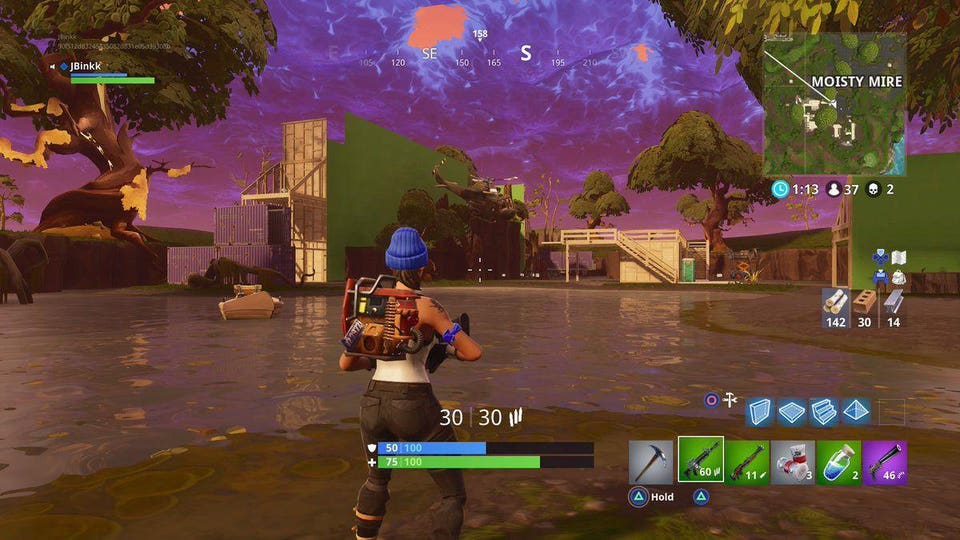 Blitz has now been updated with all the new items that have joined the game since the last time we saw the mode, which will include Port-a-forts, Clinger grenades, LMGs and more. This is a mode where there are more treasure chest and ammo spawns than usual and you can harvest 50% resources than normal. There are also way more supply drops and…everything done in Blitz will count toward your stats, so go nuts. Really happy this is back.

The biggest change to this mode is that each team now has its own bus meaning that you’ll be able to stay together with your squad more easily. Chests will now also spawn extra ammo and consumables so that you’re able to share more freely with your team instead of just a few people getting all the goodies. I wonder if Epic thinks it now has a large enough player base to constantly run two LTMs at a time, but we’ll have to see if this is a one-off, or something they start to do regularly.

As ever, Epic continues to hunt down bugs. Probably the most annoying one being fixed is that players now face the correct direction when jumping from the Battle Bus, which was a frequent annoyance. Also, the invisible dropped item glitch is supposed to be fixed. Oh, and you will be able to rotate items more quickly in the store (thank the lord).

Traps no longer wait for the building to be finished to work, which is a pretty big deal and could be game changing for the item. It’s a buff to traps after their damage has recently been nerfed, but it still may not be enough. Also, the self-service cosmetic returns feature has been re-enabled after being disabled practically since launch.

So, those are the highlights. Two LTMs at once is a big deal, and shopping carts should be unlike anything we’ve seen before in the game. I can’t wait to get playing, which has only been delayed by my writing of this article. Time to try and jump Dusty Divot in a cart.