After yesterday’s insane live rocket launch/reality shattering event, we have arrived at the end of season 4 of Fortnite, and season 5 is just over the horizon. That means one final week of challenges, and as ever, the week 10 challenges have leaked online courtesy of Fortnite Tracker.

Here’s what you’ll be asked to do in this final week, though these are subject to change before the list actually goes live: 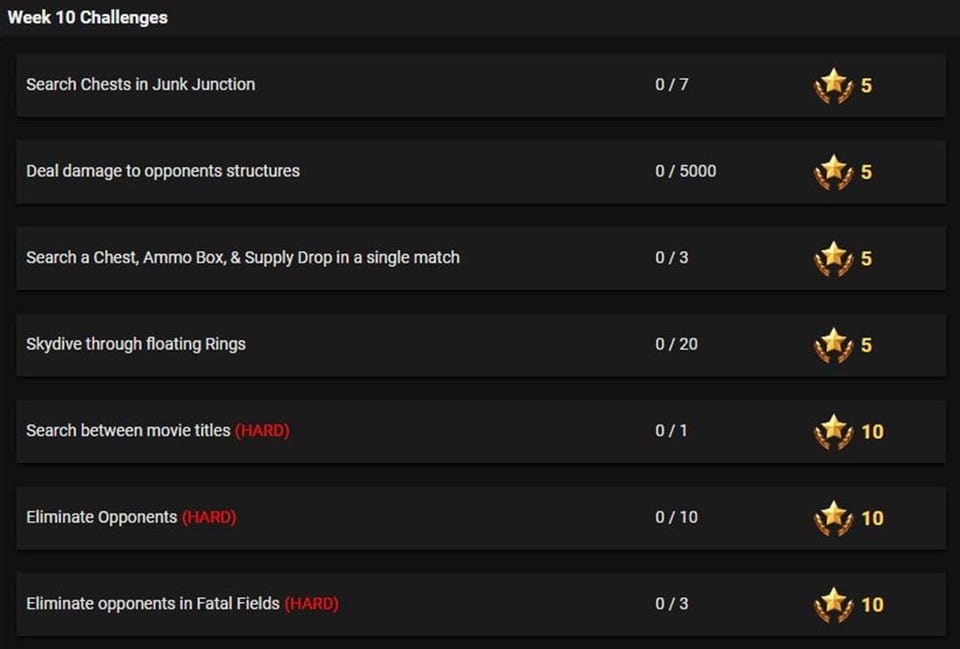 So while there are no obviously incomplete challenges here like there have been in previous weeks, I still am a little skeptical that this is the final list. Search between movie titles was listed last week when Fortnite’s challenges leaked, but it was apparently pushed to this week, and I would expect it to actually land this time given that this is now the final week.

I do not believe that “Skydive through floating rings” is going to be an actual challenge. Last week we had “visit Taco shops” listed as a leaked challenge, which was an obvious repeat, and it eventually changed to “visit the center of named locations in a single match.” Given that this is week 10, I have to believe that Epic is probably planning something that has to do with the rocket launch aftermath and reality breaches that are starting to appear on the map (visit 3 mystery portals or something). Skydiving through rings yet again as a final week challenge doesn’t add up to me, so I would expect this one to change. But we’ll see.

The rest of these? They might just stay. Chests in Junk Junction, kills in Fatal Fields and structure damage are all pretty straightforward. There’s also a flat “get 10 kills” challenge which we don’t see often, so that’s interesting.  Just make sure three of those are in Fatal Fields I guess, though I hate that part of the map.

The Chest, Ammo Box and Supply Drop challenge might as well just be “loot a supply drop” given that in any match you are almost certainly going to be looting a chest and ammo box at some point, unless you’re dying incredibly early. Kind of a weird challenge if you ask me, but okay.

Again, I would keep an eye on that rings challenge, as I expect that it’s going to change as the week moves on. We will have our final week Fortnite guides up Thursday morning to help you complete whatever the final list ends up being, so stay tuned for that. This should hopefully be a somewhat easy week to complete if you’re still looking for that blockbuster skin, so don’t skip out on it. And I think you’re going to want to be playing anyway this week, as I would expect this crack in the sky and rifts on the ground to start doing…odd things as time goes on, particularly as season 4 comes to a close.