It’s been a weekly tradition in Fortnite: Battle Royale for a little while now: shortly after a week’s challenges go live in-game, the next week’s challenges leak out of the game files. Epic needs to have a certain amount of what it’s going to use in a coming week before it actually deploys it, and the challenges have been part of that for a little while now. And since we’ve all already moved through the Season 5, Week 1 challenges, it’s time  to take a look at what we can see out of the Season 5, Week 3 challenges, which seem to have just leaked online. This comes to us courtesy of Fortrise, a new leaker in the datamining scene that found some good leaks before Season 5 began. Let’s take a look: 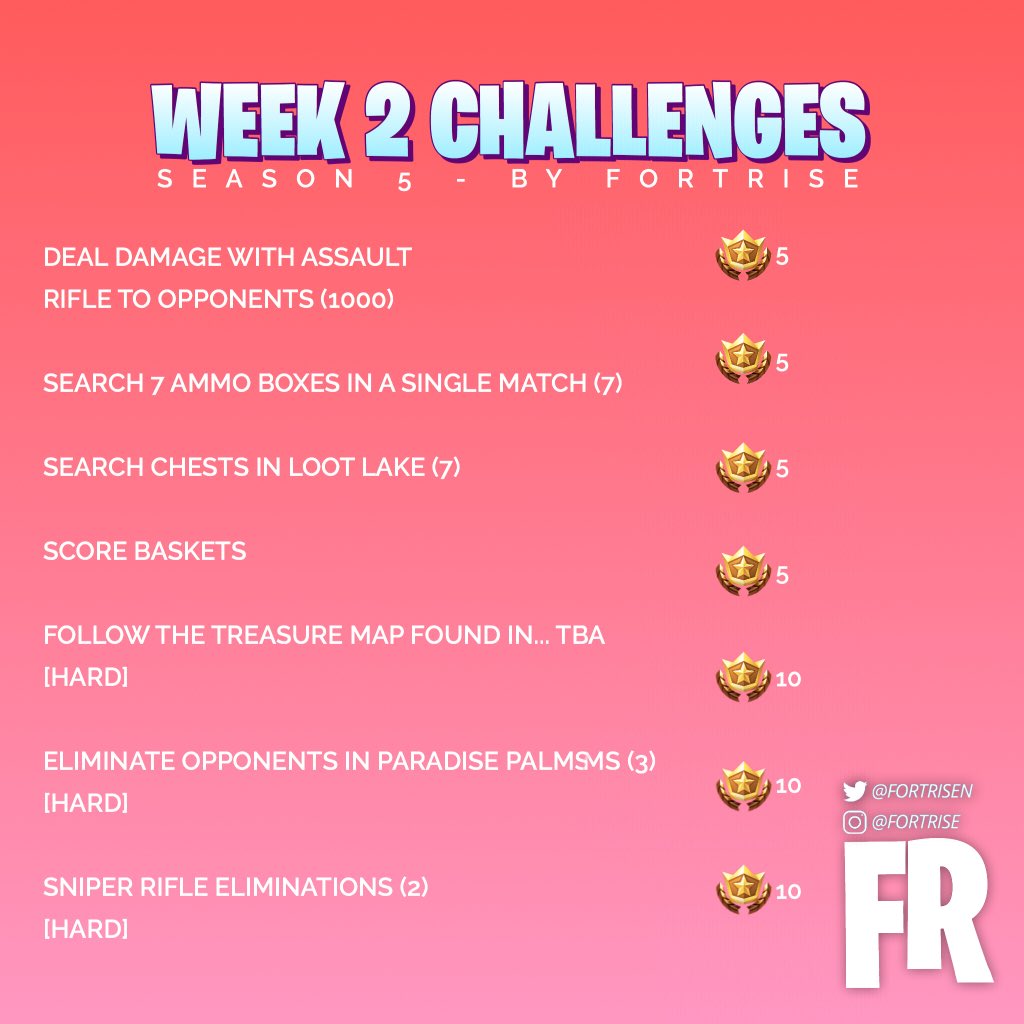 If you’re having trouble with the tweet, here’s what we’re working with:

There are reasons to be suspicious of some of these. Some, like the combat challenges, might as well be true: the locations and weapons required don’t follow much of a pattern, though Epic seems to like dropping Sniper eliminations early to give people plenty of time to do them. Others are a little more suspect, however. The treasure map, for example, doesn’t really stack with the alternating “search between” and “treasure map” challenges we’ve seen since Season 3: we’re due for a “search between” this week. In the past the leaked challenges have appeared to contradict this pattern, only for the live challenges to return to the mold.

The “score baskets” challenge is even dodgier. For one thing, it would have to be “score baskets on different courts/hoops” or something, because otherwise you’d just be able to stand at the free throw line and complete the whole challenge. For another, however, it requires you to be at least battle pass 11 to unlock the basketball, and I don’t think Epic would do that so early in the season. We had something similar with a challenge last season that asked players to spray over Carbide and Omega posters, but that was much later in the season and didn’t require as high a battle pass tier.

Still, this appears to be what’s hanging out in the code. Epic appears to have gotten wise to the fact that thee leak every week, and so they’ve gotten a little less reliable in the past month or so. They’ve still accurately predicted challenges, however, so we’ll see what makes it into the game or doesn’t.