This has been a very strange week for Fortnite: Battle Royale challenges. First, they were delayed from Tuesday to move back to Thursday, and now that this weeks challenges have been altered, and there’s a brand new one that wasn’t there before.

Gone is the challenge to search for Gravity Stones, whatever those were (I think they were different than Hop Rocks), and now players are tasked with the challenge to “dance with others to raise the disco ball by Loot Lake.”

For the rest of the Season 4, Week 5 challenges and how to complete them, click here. Here’s where to go if you want to follow the Greasy Grove Treasure Map.

This is actually building on something that fans thought was patched into the game as an easter egg a few days ago, but it turns out it was laying the groundwork for this very challenge. Some players may be a little miffed that they have to rely on others to get this done in a squad rather than doing it solo, but get on a mic and I’m guessing you’ll have no problem convincing people to get this challenge done since everyone wants to.

So, what do you actually do?

Loot Lake is a big area, but you’re going to want to head to the factory by the west side of it, which I have marked on the map here:

After that, you’re going to want to head inside with your squad. There you’ll find a large room with four dance floors in four different corners. The disco ball is hooked up to a Times Square New Year’s-like device in the middle. Once all of you start dancing, the ball will raise. Keep dancing and it will reach the top, where there will be an explosion of confetti, and with the new pop-up challenge completion notification in the game, you should see that you’ve completed it. 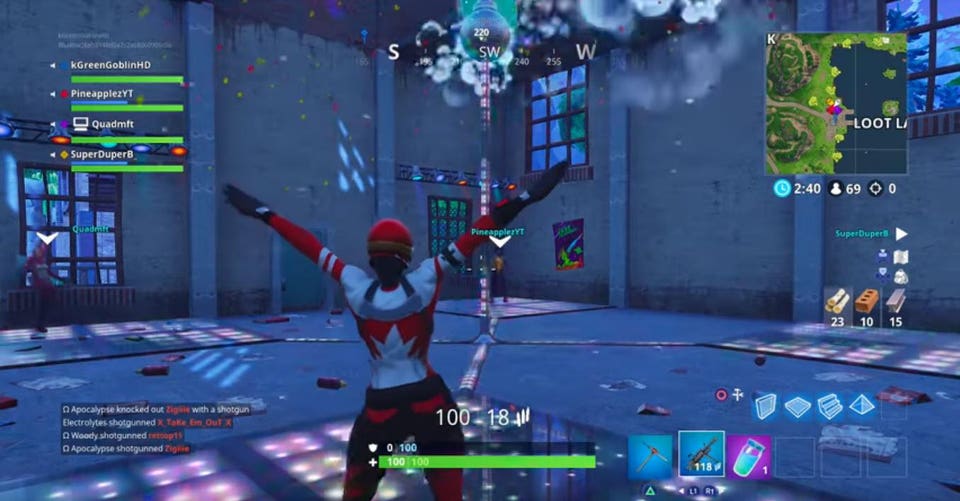 While this is mechanically easy, I’m guessing that solo players aren’t going to be super pleased to have to play squads with randoms to make this work, but it should literally take you no more than 90 seconds if you can convince your squad to do it with you. The wrinkle will be that early in the week especially, a lot of squads are going to be trying to get this done, so this loot lake dance party may end up turning into a murder festival if a bunch of teams all land there at once.

I think this is a fun little challenge, and it’s probably easier than hunting down seven different objects would have been, which is what it replaced, or dancing in front of seven different cameras all over the map, which we’ve seen in the past.

So, ready your Orange Justice emote and get dancing.